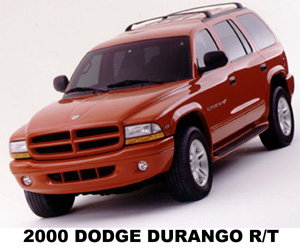 The ultimate Dodge Durango is the R/T ( Road and Track). The first high-performance sport-utility vehicle from Dodge. Offered as a mid year option in 2000 on the Dodge Durango, the R/T has all the features of the SLT model plus the R/T Group option. With its 250-horsepower Magnum V-8 engine, exceptional handling and bold styling, Durango R/T stands out from the SUV crowd.

“The Durango R/T is an example of how the Dodge performance heritage finds many modern interpretations,” said Jim Julow, Vice President, Dodge Division. “The muscle car era is still alive at Dodge. Only these days it means muscle trucks, too. Enthusiasts will find performance versions of all their favorite Dodge models in the not-too-distant future, all carrying our legendary R/T name. We’re taking what we’ve learned on the track and applying it to our production vehicles.

” Dodge Durango R/T starts with a long list of standard features such as independent front suspension, boxed frame and Magnum V-8 power, but adds even more sizzling performance to the mix.

To make the most of Durango’s 345 lb.ft. of torque, the R/T sports a limited-slip rear differential. A 3.92:1 rear axle ratio, sport-tuned exhaust and a reprogrammed engine control module give Durango R/T quicker off-the-line acceleration. Durango R/T is also equipped with a full-time four-wheel drive transfer case for four-wheel traction in all driving conditions.